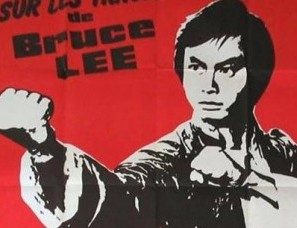 Life must have been tough for Lau Kar Wing. He was the brother of one of the most acclaimed Shaw Bros director/choreographers in the business, Lau Kar Leung, and his other brother (by adoption), Gordon Lui, was one of the biggest stars of the screen. Kar Wing may be lesser known in the film world, but that didn’t mean he didn’t fight with every inch of his talent. When he wasn’t helping Lau Kar Leung choreograph action scenes, he headed off on his own directing/co-starring/choreographing his own slices of comedy Kung-Fu outside the walls of the Shaw Bros studios. His first feature length directorial effort HE HAS NOTHING BUT KUNG FU is a prime example of a man that has something to prove. It’s what I like to call a FIELD FIGHTING FILM – lower budget independent Kung-Fu flicks shot in real locations in which most of the fights take place outdoors. There’s a weariness that can sometimes fall upon those types of projects in which the story is ramshackle, the fights are bland, and the characters boring. Thankfully, that is not the case with HE HAS NOTHING BUT KUNG FU because Lau Kar Wing is going to pull out all the stops to prove he deserves to be on top.

The story deals with a con man (played by one of the first pure comedy action actors Wong Yu) who teams up with an amnesia stricken martial arts master (the legend Gordon Liu sporting a mop of hair)  to take down some bad guys. There’s really nothing else to it.  The fights are plentiful, the characters likable, and the comedy amusing. Lau Kar Yin chooses to shoot his fight scenes with a handheld energy that wouldn’t become the norm until years later. There’s a ferocity to the fisticuffs, even with the “beat-beat” pace, that give things a real energetic burst missing from a lot of Kung-Fu films of the era. You’ve got a one against a bunch, one on one with a bench as a weapon, and even a climax where the characters hang dangerously off a the roof of a real building while trading blows. It’s the kind of dynamism that is missing from a lot of the stage bound Shaw Bros production.

All in all, Lau Kar Wing didn’t do bad. He would go on to direct a slew of Kung-Fu comedies (his specialty), choreograph a bunch of great films (Jackie Chan’s Armor of God) and even directed Sammo Hung in the underrated buddy cop comedy Skinny Tiger, Fatty Dragon (1990). He retired from the industry in 1994 because was tired of being so awesome.