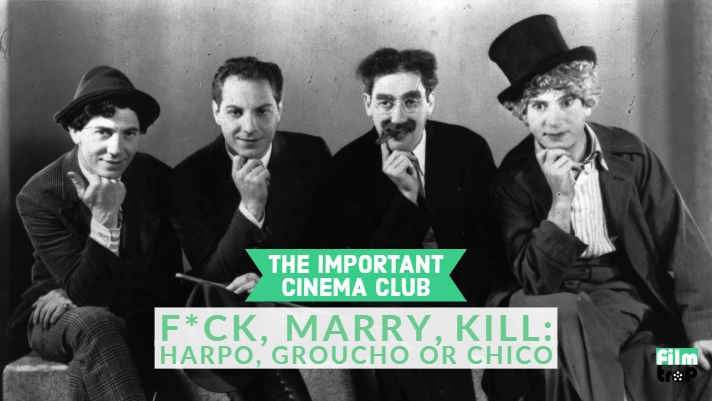 It’s time for the Important Cinema team to tackle the most important question of our time: Who was the funniest comedy team of 1933?  Will and Justin discuss the topic heatedly as they tackle Marx Brothers masterwork DUCK SOUP and the Wheeler and Woolsey comedy DIPOLOMANIACS – both films deal with politics, both were released in 1933, but only one can be the best of the best. Along the way they talk about the appeal of the Marx Brothers, the reason Wheeler and Woolsey have been lost to the sands of time, and why The Three Stooges are still the best.

When the tiny nation of Freedonia goes bankrupt, its wealthy benefactor, Mrs. Teasdale (Margaret Dumont), insists that the wacky Rufus T. Firefly (Groucho Marx) become the country’s president. Sensing a weakness in leadership, the bordering nation of Sylvania sends in the spies Pinky (Harpo Marx) and Chicolini (Chico Marx) to set the stage for a revolution. As Firefly clashes with the Sylvanian ambassador (Louis Calhern), plenty of mayhem ensues, and the countries verge on all-out war.

Diplomaniacs is a 1933 American pre-Code film starring Wheeler and Woolsey. The film in noted for its absurdist political satire, somewhat in the manner of Million Dollar Legs or Duck Soup, both of which were released within a year of Diplomaniacs. The film concerns itself with the adventures of two men who have set up a failing business as barbers on an Indian reservation. When they are sent by the tribe as representatives to a peace conference in Europe, unbeknownst to them they face constant threats from other attendees. In particular, a group of armaments manufacturers want to ensure that the peace conference is a failure, and do everything they can to sabotage it.