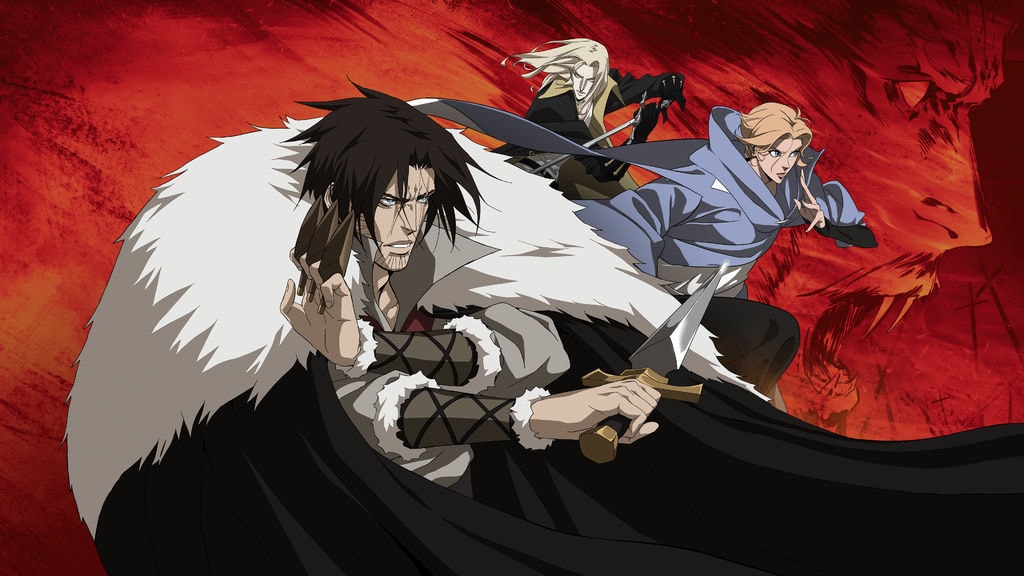 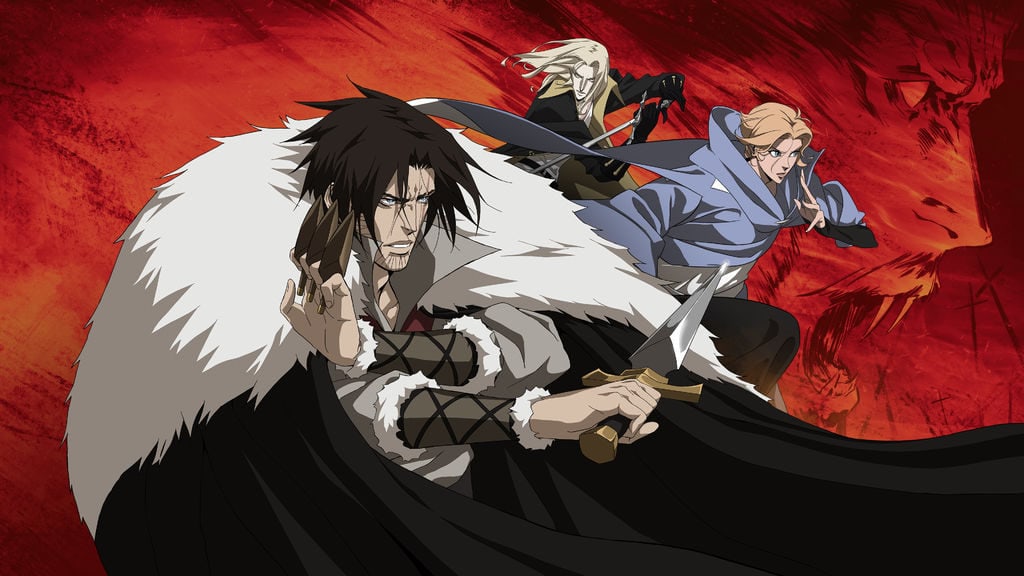 When are they going to get to the fireworks factory?

It’s a question I asked myself often while watching Netflix’s adaptation of the long running action/adventure video game series CASTLEVANIA . It’s got an amazing pedigree: Warren Ellis (of PLANETARY and TRANSMETROPOLITAN comic book fame) wrote the entire series, it’s got a pleasing old school anime look, and producer Adi Shankar (of the great DREDD) promised that it would be packed over the top violence. Who doesn’t love cartoony vampire related splatter? And it’s only four episodes. That’s essentially a movie!

I know almost nothing about the CASTLEVANIA games. I played a handful of them for a few minutes and I am aware that they deal with a vampire hunter with a whip who hunts down…Dracula I guess? All I wanted from a series was a fun action adventure with a competent hero, a villainous villain and a sense of adventure.

And you get that, kind of. By episode four (the last of the first season) you finally get to see lead character Simon Bellmont (played with gutsy aplomb by Richard Armitage) use his whip, dodge traps and fight a vampire. It’s well animated and imaginatively choreographed. The problem is that it take THREE BLOODY EPISODES TO GET THERE.

In the first episode I watched characters talk. And talk. Dracula shows up. His beloved is killed and he swears vengeance on the human race. Years pass. We see priests do a bunch of stuff. “Where the hell is the hero?” I asked myself  “The guy with the whip I saw in the opening credits who is supposed to kill vampires?” At the end of the first episode, we get to watch two guys in a bar talk about someone fucking a goat. It goes on forever, the kind of conversation you’d pass by in an RPG, but this time you have to listen to every second of it. One of them says they hate a family called “The Belmonts” That’s the name of the hero! I know that!

Cut to a guy wearing a big furry coat.

I’ve often bemoaned the decompressed style of story telling in comics (which Warren Ellis is guilty of) that takes five issues to tell the story that could be told in twenty one pages. Fans say they’ll ‘wait for the trade’ as way to indicate that a story moves at a snail’s pace. It feels like Warren Ellis showed up with a forty minute pilot for a TV  series and they forced him to make it a hundred minutes. And I’m not even saying Ellis’ script is great. It’s the same humdrum tale of a  skilled warrior who doesn’t want to be a hero. Oh, he saves people by the end, but before we get there we have to watch him grumble that life isn’t fair. It’s a dull trope that the last decade has driven into the ground. We get it! The property is super goofy and dumb, but you don’t have to coat it in bleakness to give it value. The story would have worked splendidly if Simon Belmont wanted to be a hero. He could have fought the same monsters, it could have had the same level of ‘kewl’ violence, and most importantly it would have been way more fun.

CASTLEVANIA is a fascinating example of a product that seems to be entirely designed to be binged in one sitting. Netflix seems to believe that if it was too action packed or exciting, people would turn it off after one episode, and not come back to it. Now, if it’s slow and dolls out the goods at trickle, audiences will be forced to sit through all of it assuming that it has to get good at some point. And it does! The final episode is everything you’d want from a CASTLEVANIA show! The heroes finally team up up and head off to kill Dracula. It’s akin to Star Wars taking a hundred minutes to get Luke, Obi-Wan, Han Solo and Chewy together and then ending as they set off to save Princess Leia.

No one wants that.

Still, I have to wearily admit that I will watch the Second Season when it drops, hoping against hope that it will capture some of that magic from the finale.

But if that doesn’t deliver, I’m done.

I can only dream what James Wan’s Castlevania film would have been like.