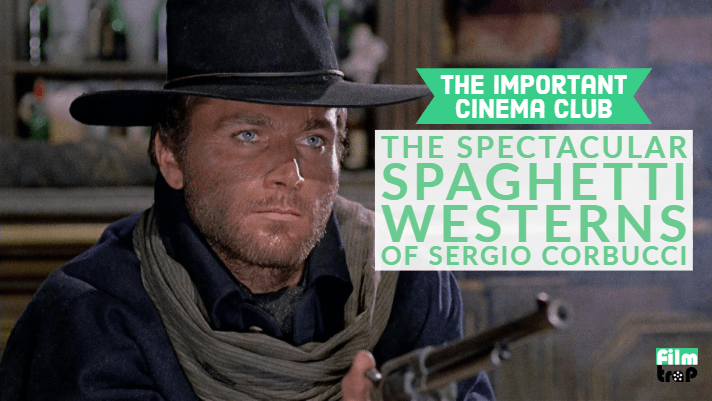 We discuss the career of The Other Sergio and his work as a director on DJANGO, THE GREAT SILENCE and SUPER FUZZ.

Become a Patreon subscriber for $5 a month and get an exclusive episode every week! This week on our Patreon we discuss REBIRTH OF MOTHRA.

On an unforgiving, snow-swept frontier, a group of bloodthirsty bounty hunters, led by the vicious Loco, preys on a band of persecuted outlaws who have taken to the hills. As the price on each head is collected one-by-one, only a mute gunslinger named Silence stands between the innocent refugees and the greed and corruption that the bounty hunters represent. But in this harsh, brutal world, the lines between right and wrong aren’t always clear and good doesn’t always triumph.

A coffin-dragging gunslinger and a half-breed prostitute become embroiled in a bitter feud between a Klan of Southern racists and a band of Mexican Revolutionaries.

Proud warrior Navajo Joe (Burt Reynolds) is the only man left alive when outlaw Marvin Duncan (Aldo Sambrell) and his brutal gang destroy his village. Riding into a nearby town of white settlers, Joe announces his plans for vengeance, but the townspeople fear Duncan’s retribution too much to stand behind him. In the course of his one-man battle against Duncan’s small army for control of the town, Joe falls for beautiful maid Estella (Nicoletta Machiavelli).

Sergei Kowalski (Franco Nero), a mercenary only out for himself and a few dollars, joins up with a Mexican peasant-turned-revolutionary, Paco Roman (Tony Musante), when the price is right. No longer content to toil for the rich and powerful, Roman plans to bring a new order to Mexico by force with his small ragtag group. While Roman and Kowalski are outnumbered facing the Mexican army, they also have to contend with Curly (Jack Palance), a vengeful killer out for blood.